What is Bitcoin Halving – Complete Explanation

Being a crypto enthusiast, have you ever wondered why they speak about digital currency but use a term from the mining industry? Have you ever wondered why bitcoin is often referred to as “Internet gold“? Apart from everything already known in economic and financial terms, there is one more feature in common. Similar to gold, as more Bitcoins are mined, there are fewer and fewer bitcoins left to be mined. And, mining them becomes increasingly difficult. This is referred to as Bitcoin Halving. Here you can find out about Bitcoin Halving – what it is, and a complete explanation.

Mining is a decentralized process that aims at solving two tasks: confirming of transactions in a confiding manner (for which enough computational power is needed), and creating new bitcoins in each block. In other words, thanks to this process a new bitcoin is added to the currency in circulation. This activity is associated with figuring out the next block. Miners are those who provide computation power to the bitcoin network. Why would they do this? They are interested in this simply because they receive rewards of two types: new coins minted with each fresh block (currently it is equal to 12.5 bitcoins), and transaction fees from the whole range of the transactions contained in the block. The condition to gain this bitcoin reward is finding a solution for a difficult mathematical problem based on a cryptographic hash algorithm. This solution to the problem also referred to as the proof of work, is taken in the new block and is considered as proof that the miner spent substantial computing effort. This kind of a challenge to solve the proof-of-work algorithm with the goal to receive the payment and the right to log transactions on the blockchain constitute the foundation for bitcoin’s security mechanism.

What is Bitcoin Halving

If you haven’t heard about a phenomenon from the title, I must warn you not to get disappointed at once. Further, you will see how sophisticated and thought out to the last detail the bitcoin infrastructure is.

There is a statement embedded in bitcoin code which says that after every 210,000 blocks (or a schedule of about four years, given 10 minutes per block) the above-mentioned reward for the new block has to be reduced by half. There is a rationale for such a reward cut. The reasons for halving are as follows:

Now, look how well-thought-out the idea is. Satoshi Nakamoto mined the first bitcoin block (known as genesis block) and got 50 coins over the course of six days. The first exchange rate was $1 = 1,309.03 BTC. The bitcoin creator noticed a possible issue connected with this: he made a prediction that over time computing power will naturally double in strength. This meant that more and more advanced hardware will come to his system of issuing Bitcoins, and it will be able to mine many times faster than the 10 minutes per block which was initially designed as ideal. In this case, the before-mentioned excessive supply and inflation will be observed. Apart from a requirement for gradual difficulty increment in the mining process, Satoshi considered the implementation of a “halving event” that could avert the impending problems that the currency might encounter.

As far as we can see from the two previous cuts, bitcoin halving day is an event that causes much anxiety among the crypto community. The main existing concerns were connected with the fact that electricity prices would be higher than the gain in coins, which would make many miners quit from this activity. However, as the history – although being particularly short – shows, bitcoin prices were getting much higher a year after the rewards reduction. Still, this is not a trend we can absolutely rely upon. Even knowing the fact that cryptocurrency prices are very event-driven, the rise could also be explained by the more focused media attention and new participants coming into the crypto world.

When Was the Last Bitcoin Halving

The last cut-in-two took place in 2016. Prior to this event, some analysts assumed that after the halving a significant portion of miners would drop off the network leading to such adverse consequences as increasing the time between blocks and maximizing the transaction capacity. The statement about exponential increasing of claim confirmation times and plunging of the system reliability added to the panic. Some analysts went further. For example, Nicolas Courtois called the halving scheme “the mistake of Satoshi Nakamoto” and suggested gradual reward decreasing.

The whole picture looked like a doomsday, though the idea was not borne out. Actually, a year after we could observe bitcoin reaching its highest prices.

When is the Next Bitcoin Halving 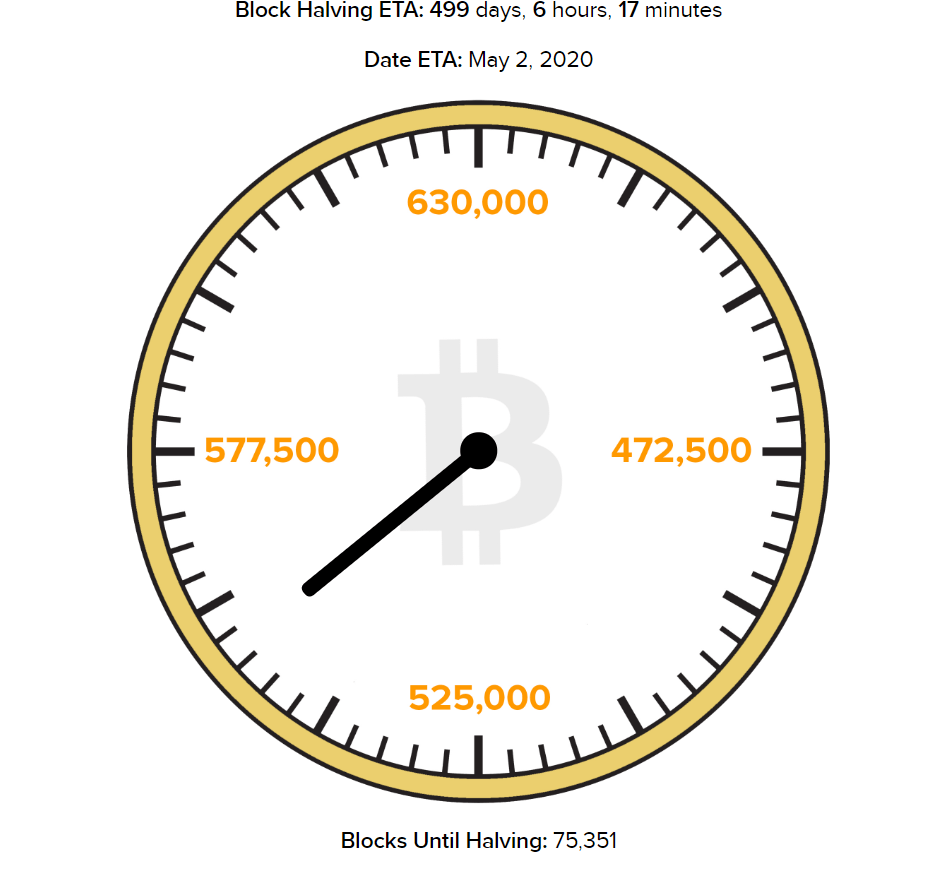 We are awaiting the next reward reduction in mid-2020. Still, the discussions as for the impact of this event are already heard in the market. You can even find the sites with a countdown to halving. The situation could meanwhile change much sooner than May 2, 2020 (estimated halving date). Some analysts on the Web expect prices $7000-8000 until May 2020 with a significant increase after that. As well as the predictions based on the statistics are rather optimistic. We can assume that the price won’t rise on the halving day itself:

Bitcoin block halving is an important phenomenon introduced into its DNA to ensure ecosystem’s self-regulation: It prevents hyperinflation, increases mining times and guarantees high bitcoin prices. The event can highly impact the price movement and cause massive community resonance. The next reward dropping is expected in a year and a half making us guess what impact on the bitcoin future it will have.