There are millions of people who dream of having Bitcoin – the digital gold of the 21st century. There are numerous ways to obtain some: buy it through
one of the exchanges; invest in crypto mining (hardware or cloud mining), play crypto casino games or get involved with the faucets.

A Bitcoin faucet is a reward system in which users can receive small amounts of BTC, known as satoshis. Satoshis are to Bitcoin as pennies are to dollars. However, while it takes 100 pennies to equal 1 dollar, it takes 100 million satoshis to equal 1 whole BTC!

In a faucet game, users get rewarded with Satoshis for performing different tasks in a website or app, usually for filling out a captcha. But more recently, playing online games for small amounts of Bitcoin has become popular. Though it’s hard to earn much using crypto faucets, they are a way for people to pick up some satoshis without having to do any hard work, or pay any money for it!

Robot Coin is a faucet game that rewards you with BTC for defeating robots.
It is an arcade game that you can play from your PC after a hard day of work, and hopefully, win some extra BTC in the process. It sounds like an exciting way to spend some free time while unwinding! Here is our review of this game.

It is an arcade that you can play from your PC after a hard working day and making extra BTC the same time. Doesn’t it sound exciting that you can get free coins for playing favorite games?

RobotCoin was created by Fun Coin Games (who also manage Wonderland Coin and Monster Coin Game, all pay for referrals) to help people start off with Bitcoin. Their goal is to create faucets that are engaging and also help teach newcomers about Bitcoin. The site graphics are cool and eye-catching as well.

The algorithm of the game is quite easy and straightforward – you defeat Robots and earn Bitcoin rewards. As you go up in Zones, you will encounter more powerful enemies who will give you more rewards. You can upgrade your attacks with your balance, to defeat bots quicker.

A new higher leveled Robot will be introduced with each zone you face. You will still encounter lower leveled Robots also, but bots that are the same level as the zone will appear more likely.

Attack enemies until they reach 0 hp, then you can upgrade your Attacks by using your balance. Having greater attack power will help defeat higher leveled bots. Once he is defeated, you will receive a reward. When you defeat all the Robots in a Zone, you go up a Zone, where the bots increase in level and give out better rewards. Once you defeat the Robot in Zone 20, you will receive 1,000,000 Satoshis and you will be able to play again from the beginning!

Every time you win; you’ll earn a 2% permanent bonus! Since the game is over for you, you will have to restart back to the beginning of zone 1 and attack level 1.

There is also a referral program where you can get a lifetime referral bonus from each of the users you bring, depending on how many referrals you bring. However, you will only get the referral for activated users:

You can also share your character on Facebook and Twitter to earn a 30% bonus on your next claim. Or you can get a 50% bonus if you also follow the game account on Twitter! It will add on to any other bonus you have. It will only work once, so be sure you use it wisely.

Robot Coin is a reputable Bitcoin faucet game that have been in the market for a couple of years and has a large user base.

They will payout anyone who will be patient enough to get to level 20. All you need to do is to defeat all the enemies, complete all the levels and have a Bitcoin wallet, either a standalone client-side wallet or a cloud-based wallet, your decision.

You can cashout directly to your wallet once you reach a balance of 50,000 satoshi. There is a withdraw fee of 5,000 satoshi. Expect to see your transaction in the blockchain within a few hours.

Defeating bots manually may not be that easy and may take all your free time. And this is where you might be looking for some help.

How does it work?

However, hiring a bot might be risky. You never know how long it’s gonna work and actually make money for you. So we would recommend thinking twice before making an investment. If you are still interested, check this forum to find your bot.

Unfortunately, some faucets run dry, while others are scams from the get-go. While Robot Coin is one of those faucets that you can trust as it really pays. It won’t make you rich, but why not to put a few coins into your pocket just for playing a game. 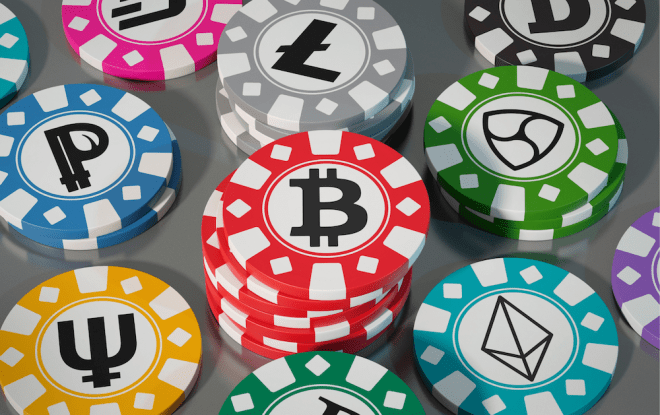 How Cryptocurrencies Became a De-facto Payment Method for Online Gambling