Home / Altcoins / Ether vs. Ethereum: There Is a Difference!

Ether vs. Ethereum: There Is a Difference!

Ether vs. Ethereum? Do you get confused when you see both of these terms being used? Do you think they are synonymous? Well, we’re here to tell you that they are definitely NOT interchangeable! People often do make the mistake, however.

And so, the short answer is: Ethereum is a decentralized blockchain platform, while Ether is a token built on this platform. For the long answer, keep reading!

As the official website states, Ether (ETH) is a necessary element — a fuel — for operating the distributed application platform Ethereum. It is a form of payment made by the clients of the platform to the machines executing the requested operations.

In other words, Ether token powers the transactions, decentralized applications, and smart contracts on the Ethereum blockchain. It is a unique piece of code that can be used to pay for the computational resources needed to run an application or program. It is a digital currency that functions like cash, in that it does not require a third party for processing or approval of transactions. 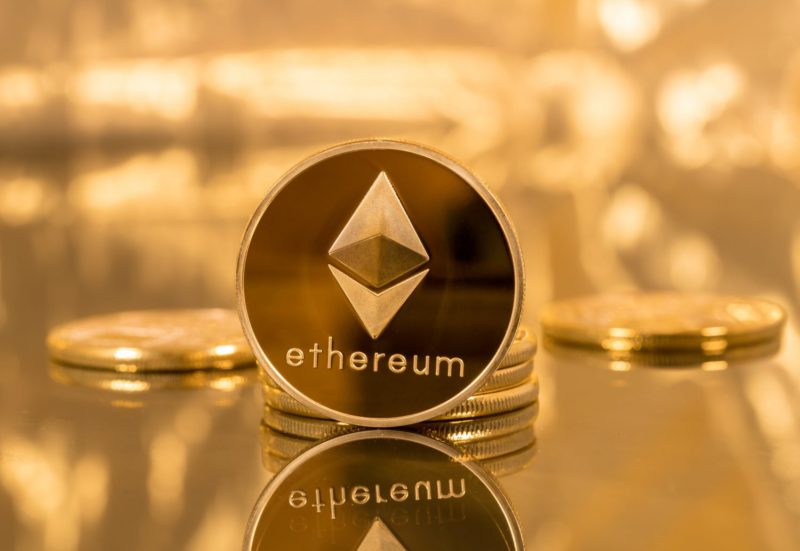 Its model is unique in that it does not emphasize deflation like most other popular cryptographic assets. Initially, issuance of ether was capped at 18 million per year, which is 25 percent of the initial supply raised in the crowdsale. But more recently, Vitalik Buterin said that issuance levels will be contingent on security rather than a predetermined schedule. Although this rate is fixed each year, the monetary inflation rate actually decreases every year, making ether a disinflationary currency. Disinflation occurs when the rate of inflation shrinks over time.

Ether that is used for investment purposes is a denomination of ether equal to one quintillion (1018) ether. This is commonly referred to as Ether (ETH).

Ether can also be mined through CPU and GPU Mining via mining blocks on the Ethereum blockchain.

Ethereum might not need miners forever, though. Developers plan to ditch proof-of-work, the algorithm that the network currently uses to determine which transactions are valid and protect it from tampering, in favor of proof of stake, where the network is secured by the owners of tokens.

What is Ether Used for?

Ether is capable of being programmed by developers for many different purposes. Besides being programmed to running a decentralized application (DApps,) or enabling a smart contract, it can also be used for generating new token for an initial coin offering (ICO) or simply for making standard P2P payments. That’s why Ethereum (or Ether) is also called programmable money.

Say there is an app on the Ethereum network that allows you to create, modify, and delete simple notes. In order to complete any of these tasks, the app requires processing power via the network.

To cover the cost of this power, you likely need to pay a marginal fee anytime you wish to make any changes to your existing notes. Ether is the token by which you make this payment.

Ether is the crypto-fuel allowing smart contracts to run. It provides the incentive for nodes to validate blocks on the Ethereum blockchain, which contains the smart contract code. Every time a block is validated, 5 ethers are created and awarded to the successful node. A new block is propagated roughly every 15–17 seconds. Some nodes may find the correct solution to a block without having it included in the network. The Ethereum network rewards these nodes with 2–3 ethers.

Ethereum is a distributed public blockchain network. It is fully autonomous and is not controlled by anyone at all. It has no central point of failure, as it is being run from thousands of volunteers’ computers around the globe, which means it can never go offline. Moreover, users’ personal information stays on their own computers, while content, such as apps, videos, etc., stays in full control of its creators without having to obey by the rules imposed by hosting services such as App Store and YouTube.

Ethereum network is different from the Blockchain network, with its own Internet browser, coding language and payment system. Most importantly, it enables users to create decentralized applications on Ethereum blockchain.

The entire Ethereum system is supported by a global system called ‘nodes.’ Nodes are volunteers who download the entire Ethereum Blockchain to their desktops and fully enforce all the consensus rules of the system, keeping the network honest and receiving rewards in return. 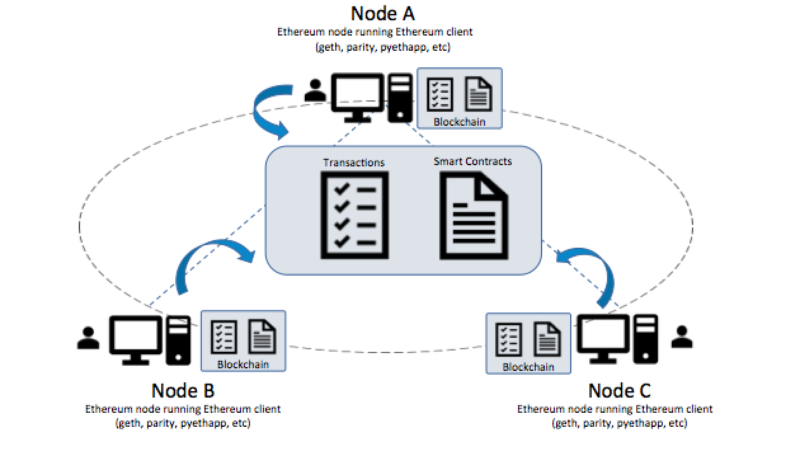 Smart contracts are designed to automatically perform transactions and other specific actions within the network with parties that you don’t necessarily trust. The terms for both parties to fulfill are pre-programmed into the contract. The completion of these terms then triggers a transaction or any other specific action. Many people believe that smart contracts are the future and will eventually replace all other contractual agreements, as the implementation of smart contracts provides security that is superior to traditional contract law, reduce transaction costs associated with contracting and establish trust between two parties. 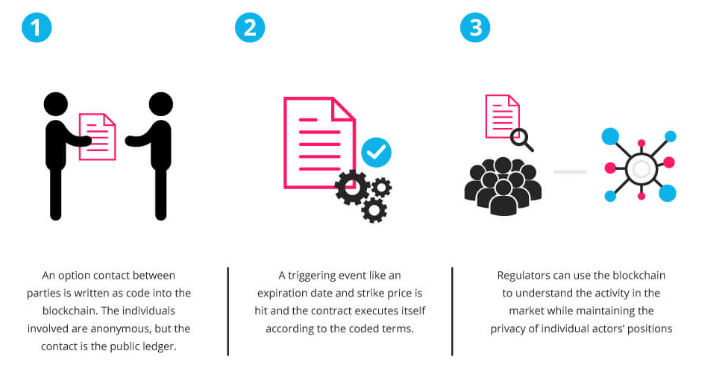 The Ethereum Virtual Machine (EVM) serves as a runtime environment for smart contracts based on Ethereum. It provides users with security to execute an untrusted code while ensuring that the programs don’t interfere with each other. EVM is completely isolated from the main Ethereum network, which makes it a perfect sandbox-tool for testing and improving smart contracts.

EVM is software that runs on the Ethereum network and enables anyone to run any program, regardless of the programming language given enough time and memory. The Ethereum Virtual Machine makes the process of creating blockchain applications much easier and efficient than ever before. Instead of having to build an entirely original blockchain for each new application, Ethereum enables the development of potentially thousands of different applications all on one platform.

Ethereum allows developers to build and deploy decentralized applications (dApps). They are designed to avoid any single point of failure and typically have tokens to reward users for providing computing power. 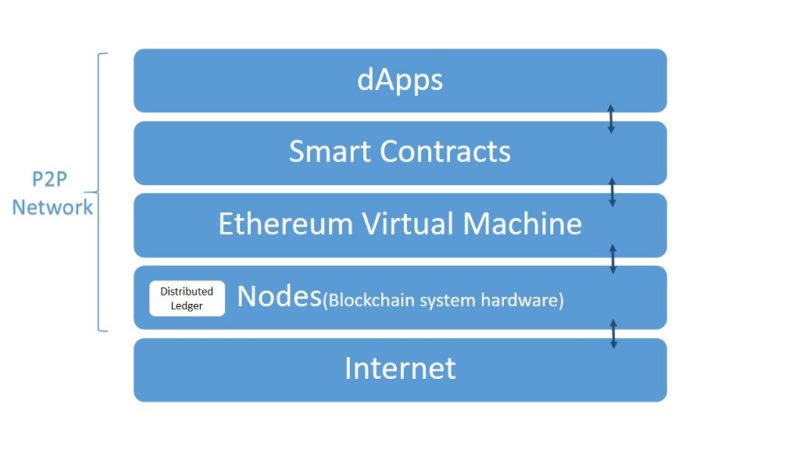 Decentralized Autonomous Organizations (DAO) operate completely transparently and independently of any intervention, with no single leader. They are run by programming code and a collection of smart contracts. It is designed to eliminate the need for a person or a group of people in complete and centralized control of an organization.

DAOs are owned by people who purchased tokens. However, the amount of purchased tokens doesn’t equate equity shares and ownership. Instead, tokens are contributions that provide people with voting rights.

Ethereum is also used as a platform to launch other cryptocurrencies. Because of the ERC20 token standard defined by the Ethereum Foundation, other developers can issue their own versions of this token and raise funds with an initial coin offering (ICO). In this fundraising strategy, the issuers of the token set an amount they want to raise, offer it in a crowdsale, and receive Ether in exchange. Billions of dollars have been raised by ICOs on the Ethereum platform in the last two years, and one of the most valuable cryptocurrencies in the world, EOS, is an ERC20 token.

Ethereum is a publicly distributed blockchain platform designed for enabling smart contracts and decentralized applications while Ether (ETH) is the digital currency used to power that platform.