12 Best Ethereum DApps That Are Still Alive in 2022

If you are interested in Ethereum dApps, then you have come to the right place! Here, we will introduce to you the 12 best Ethereum dApps still being used in 2022. But first, we’ll define what they are, and how they work.

What are Ethereum Dapps?

Blockchain is a ledger of records organized in ‘blocks’ that are linked together by cryptographic validation. The block validation system results in new transactions being added irreversibly and old transactions preserved forever for all to see, hence its transparency and resilience. Open-source software that leverage on the blockchain technology are called Dapps.

All existing dApps have been classified by the Ethereum white paper as:

On Ethereum where smart contracts are most famous, one user has to pay ether to another in exchange for some service, good, information, etc to settle down the contract. To facilitate the distribution of data, the network’s distributed computer nodes are used.

Apps where money + outside information is involved

Apps that manage governance and voting

DApps usually use DAOs (Decentralised Autonomous Organisations) to manage governance and voting on the network. They aim to form truly decentralized and autonomous apps, where there is no need for a leader or team or board members. Community members can have rules in the initial on how members can vote and reach consensus amongst themselves. Rules for company funds are also released in the initial so that users know what percentage of the fund is going where. Then the DApps are let to be continued by the community members forever.

If you have necessary skills and are interested in building Ethereum dApps, then you should follow this process:

A whitepaper should be published on the DApp website with the ideas for Ethereum dApps: why this DApp is necessary for the blockchain community; its new or special features, and future plans or roadmap of the DApp.

After publishing all the information, you need to attract investors by the means of token sale or crowd sale.

Spread the tokens of your DApp to get fund and give ownership of the blockchain in return.

After you collect the funds, use them for building dApps with Ethereum and launch it on the market.

After getting a better understanding of the technology, it is time to check top Ethereum dApps.

IDEX is a decentralized exchange on the Ethereum blockchain that features only Ethereum and ERC-20 token trading pairs.

IDEX leverages smart contracts to manage transactions for its users. It gives users the opportunity of getting tokens from ICOs before they get listed on centralized exchanges. It charges a 0.1% fee for market makers (i.e. the seller) and 0.2% fee for the takers (i.e. the buyer).

The exchange went live in October and experienced rapid growth in January. It is currently the highest ranking exchange dApp on the Ethereum blockchain by trade volume. 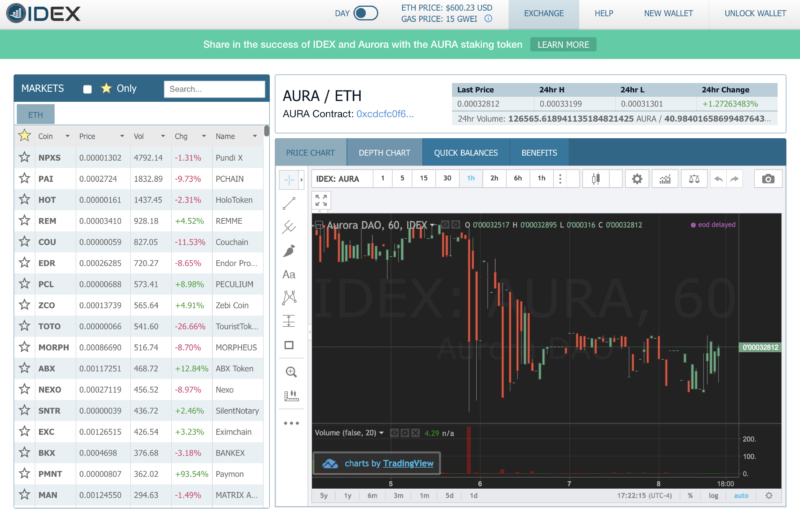 Gnosis is a prediction market platform hosted on the Ethereum blockchain. A prediction market is an exchange-traded market where people speculate about future real-world events like presidential elections, commodity prices, etc. People who make accurate predictions are rewarded. The rewards are paid in GNO tokens or any other cryptocurrencies depending on the preset rules.

CryptoKitties is a game that allows users to collect, trade and breed unique, non-replicable cats. These cats or kitties are called cryptocollectibles. In fact, they are ERC-721 tokens, Ethereum-based assets that, according to CryptoKitties co-founder Arthur Camara, could eventually be used to tokenize real-world assets such as art and real estate.

However, there is not really much you can do in the game. Despite this, it is still a great introduction to Ethereum DApps and the developers raised a ton of money, so hopefully, they will add additional features that make it more fun to play in the future. 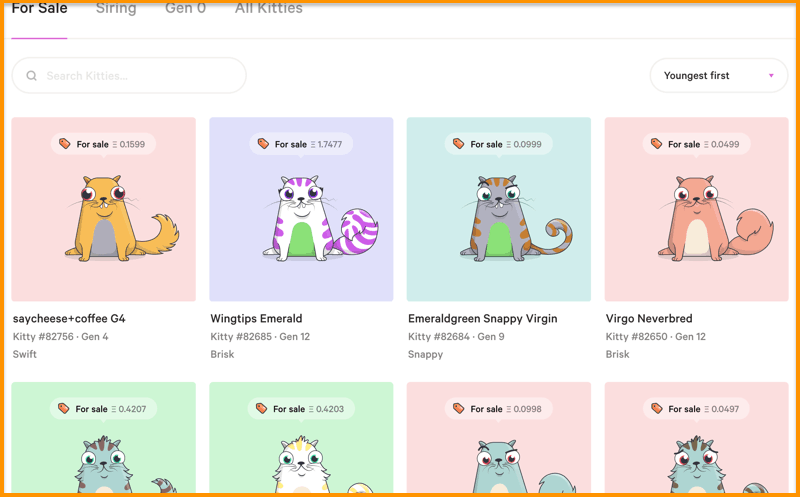 NameBazaar is primarily a marketplace that lets users buys sell and manage ENS names. ENS is basically a system that allows people to associate an Ethereum address with a human-readable name.

The ENS system contains a registrar and auction process which allows any Ethereum user to register and acquire a name via auction. However, no resale mechanism is provided, meaning once a name is registered and owned, the owner has no way of trustless transferring ownership of the domain on the blockchain through smart contracts.

Also, users can request certain names be listed, and track the status of any name on the website.

Any names already registered and owned by a MetaMask or Parity address can be listed for sale on the site through the ‘Create Offering’ page. 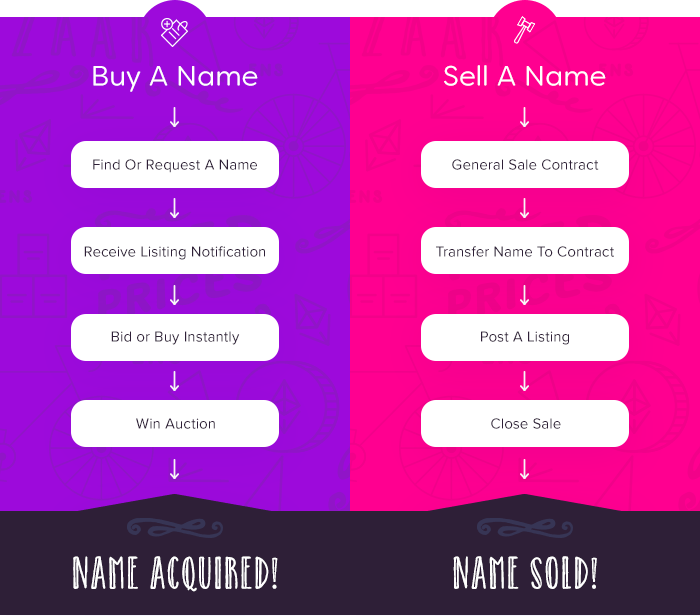 LocalEthereum is a worldwide marketplace for people to buy and sell Ether. It’s a peer-to-peer marketplace where buyers and sellers can pick out each other’s listings and make a deal.

You can find people trading ETH with your local currency and choose whatever payment method works best for you as long as the other trader is happy with it.

For security and safety, it uses an Ethereum-powered escrow service to securely hold funds until transactions are concluded, and its end-to-end encryption means buyers and sellers can communicate in complete privacy.

You can use any currency in the world with this exchange as long as you can find other traders using it.

Bancor operates similar to an exchange in that users can buy and sell ERC-20 tokens, but the mechanics that enable these actions are completely different. It does not match buyers and sellers. Instead, Bancor’s protocol aims to provide liquidity between different Ethereum-based assets using “smart tokens”.

Tokens are always available for purchase regardless of trade volume. This is possible through Bancor’s automated pricing mechanism which increases a token’s price and its supply each time it is purchased. Even more, the price for both selling and purchasing tokens is the same due to the algorithmic price calculation of the Bancor Formula.

Additionally, the UI and UX of this market place makes it incredibly easy to buy and sell tokens quickly and efficiently.

ForkDelta is a decentralized Ethereum Token Exchange with more ERC-20 listings than any other exchange. ForkDelta currently acts as an open source, updated interface for Ether Delta’s smart contract with an active and public development team.

ForkDelta started as a fork of EtherDelta when EtherDelta was sold to new owners who introduced questionable development decisions.
It prides itself on being an open, fair community with developers who are easily accessed and an open source codebase.

Prism is a decentralized and trustless asset portfolio market by ShapeShift hosted on the Ethereum blockchain.

Using just Ethereum you can create a smart contract to form a Prism portfolio. Inside of this portfolio you can pick and choose multiple cryptocurrency assets as well as the percentage they hold in the prism. And there is only 1% monthly fee paid to sellers. 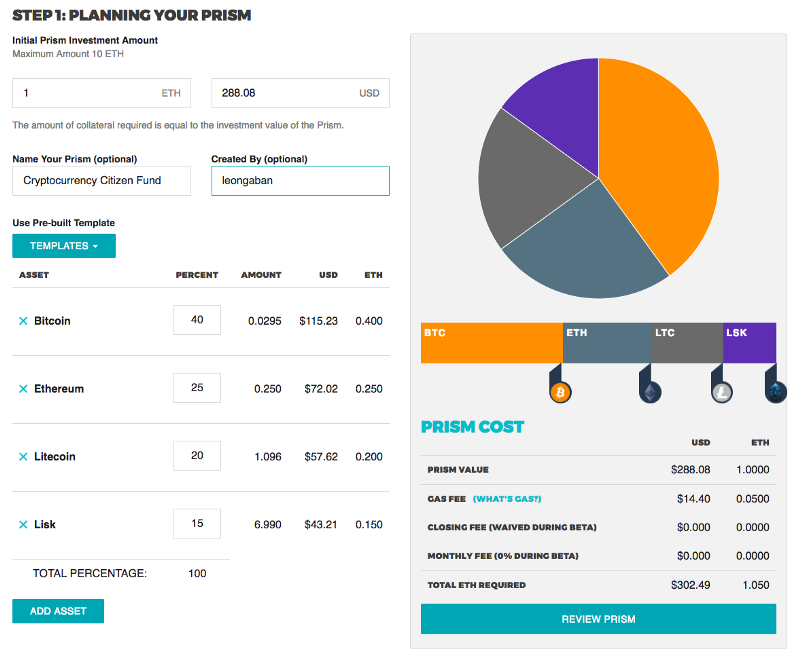 uPort is an identity management platform powered by the Ethereum blockchain. At its most basic level, it is an Ethereum address. So if all you need when interacting with an end user is their Ethereum address, this is provided by uPort. However, this platform also allows apps and their users to exchange information privately, while still backed by the security of the Ethereum blockchain.

The real power of uPort is that it makes your Ethereum app more approachable to your end users. Some of the interactions enabled by uPort are simple blockchain transactions like buying shares on the Gnosis prediction market, while others include off-chain interactions like making private statements to other uPort users or apps. 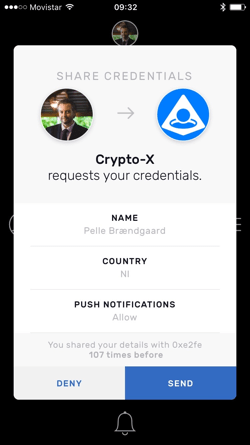 TenX is a platform where you can spend cryptocurrencies anytime and anywhere. It has an Android and iOS app that changes virtual currencies to the currency accepted by a merchant with real-time transparent rates and 0% conversion fees.

The Android and iOS app makes it possible to send and receive cryptocurrencies. It has a wallet that can store the major cryptocurrencies and issues a card that can be used to withdraw from ATMs. They have a partnership with Visa and are planning to get their banking license soon. 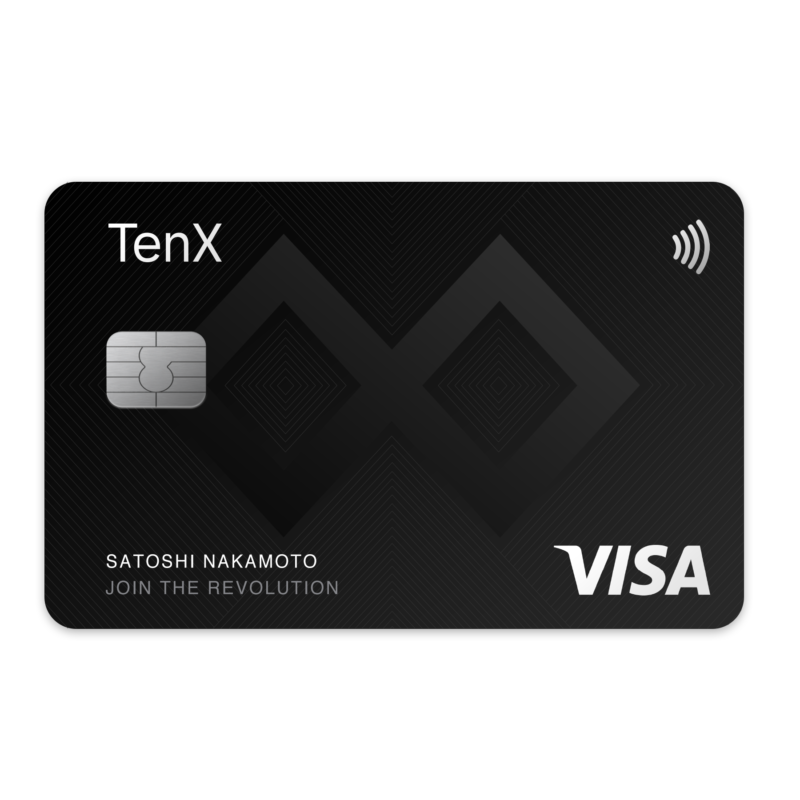 Decentralized News Network (or DNN) is a dApp on the Ethereum blockchain that distributes censorship-resistant and verifiable news. DNN ensures accuracy and transparency by giving incentives to writers, reviewers, and readers for carrying out required tasks.

The system involves writers, reviewers, publishers, and readers. First, the writers produce and submit news content. Then reviewers inspect the content for accuracy. Next, acceptable content is published for readers without the fear of being taken down.

Writers earn when their articles are published, reviewers earn by approving articles, and readers earn by suggesting articles for writers or by finding inaccuracies in the content of the writer.

CryptoCribs aims to be a decentralized Airbnb. For now, it is still fairly centralized but has significantly lower fees than Airbnb. It provides a peer-to-peer short-term rental system that utilizes digital assets like bitcoin cash and Ethereum for payments.

The site allows travelers to pay in bitcoin core (BTC), Bitcoin Cash (BCH) or Ethereum (ETH) for short-term apartment and loft rentals. The startup has said it also plans to integrate Monero in the future. Cryptocribs is similar to Airbnb but wants to be a home for all the crypto nomads and perpetual travelers around the world. The Cryptocribs business model was created by Erasmus Elsner, a student from UC Berkeley in California. So far Cryptocribs has been seeing some growth since its inception a few months ago, as the startup has listed over 1,500 hosts on the platform. Property rentals are available in the U.S., Europe, Australia, Asia, and more as the site offers a global map for each location.

In June 2017, there were less than 400 dApps on the Ethereum blockchain. The number of dApps has more than tripled in one year and it is expected that this pace of growth will continue and scale higher, especially when Ethereum scales.

If you feel incentive to developing dApps Ethereum, it might be good time to start your own project.