10 Best Bitcoin and Cryptocurrency Forums and Communities To Join 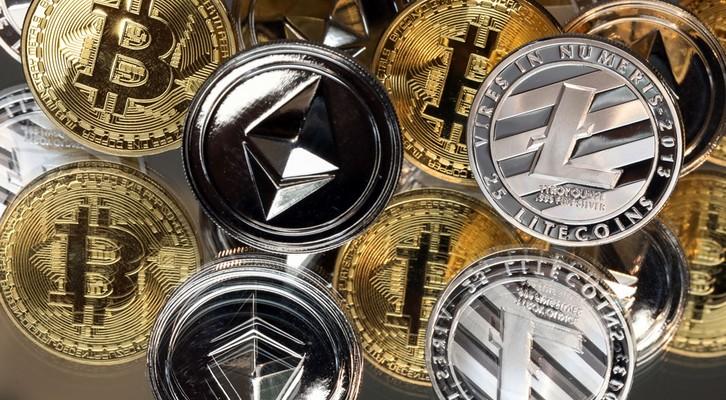 Bitcoin is the best-known cryptocurrency. It can be a source of income or investment, a hobby, or even a lifestyle. It is a decentralized, volatile currency whose value can change every day, every hour, and even every minute. If you are engaged with the coin, you should be aware of the latest happenings and news. You should be able to discuss it with the others who are interested in this “digital gold”.

Bitcoin forums can provide you with answers and insights into the whole Bitcoin world – the mining process, trading, the Bitcoin ecosystem, etc. Remember, however, that forums can eat up your valuable time, So, we have prepared our list of the 10 best Bitcoin and cryptocurrency forums, in an effort to help you navigate through the forum quagmire.

Bitcoin Talk is one of the largest communities. The forum has been active since 2009, and is now a home for more than 2 million users. You can expect to have someone active and engaged in a discussion twenty-four hours a day. It’s not limited to one specific country, and actually has quite a few local communities that you may want to become a part of.

The forum is mainly focused around the topics of mining and economics, bringing together some of the brightest minds in the Bitcoin community, and teaching newcomers what is Bitcoin, and how to best approach it. You’ll also find plenty of guides and tutorials on how to get started with Bitcoin mining.

The Reddit Bitcoin is one of the biggest forum. It was founded back in 2005 by two college friends, and now is home to nearly 749237 subscribers.

It is frequently the home of discussion about the latest eCommerce stores enabling Bitcoin, there have also been several people from the government visit the community; expressing their admiration and support for digital currencies.

Reddit is a social news accumulating site that enables clients to frame groups known as subreddits around points of intrigue.  The two with the most subscribers are r/Bitcoin, which has over 230,000 subscribers, and r/BTC, with over 36,000.

Bitcoin Forum is all about Bitcoin, how to work with it; how to mine; where to find resources, etc.

You can expect this forum to be a little bit less of a chaos, and because of that – there are quite a few people who’d rather discuss their problems with a bunch of people, than tens of stereotypes trying to prove they’re right in every occasion.

Cryptocurrency Talk is your source for advice on what to mine, technical details, new launch announcements, and advice from trusted members of the community. News, information, and discussions about cryptocurrencies, blockchains, technology, and events.

Bitcoin Garden is one of the more dynamic and consistently developing groups that has a significant solid concentrate on alternative cryptocurrencies.

The community claims to be an “Informal organization of bitcoin/altcoin news”. Bitcoin Garden prides itself on encouraging the formative desire of a few altcoins. It’s pushing for their posting on significant trades. This is a place where you will find a big list of digital coins.

The personal care and devotion given to this project is evident from its slow yet steady growth from a blog/news aggregation to its present offerings such as a daily news site and forum. Their track record and success stories in getting an altcoin popular and listed is probably what gives Bitcoin Garden its most value.

In addition, most new coins host a giveaway thread on Bitcoin Garden in its own Giveaway section, which is by far its most popular with over 100,000 individual threads (get coins for simple actions such as Twitter re-tweets, voting and airdrops (usually hundreds or thousands of coins simply by installing a wallet for a newly-launched alt).

Many alts also have their own threads listing faucets giving out free altcoins. Just using the resources here can easily gain you generous sums of alts, especially if you participate in the giveaways.

Bitcoin Stack Exchange is familiar as the Bitcoin’s question and answer website. Jeff Atwood and Joel Spolsky developed it in 2008.

This platform designed in such perception that the best answers are voted up and raise to the top automatically. So that Bitcoin crypto-currency enthusiasts can view best results.

You’ll quickly learn that there are a few types of people out there – in the Bitcoin community – and so you’ve to be careful when wording your questions, or ironing out your bugs. Stack Exchange is for those who’re looking to find answers on technical questions (like how to build your own mining pool), or those who want to explore the capabilities of Bitcoin development, particularly in the wallet market. 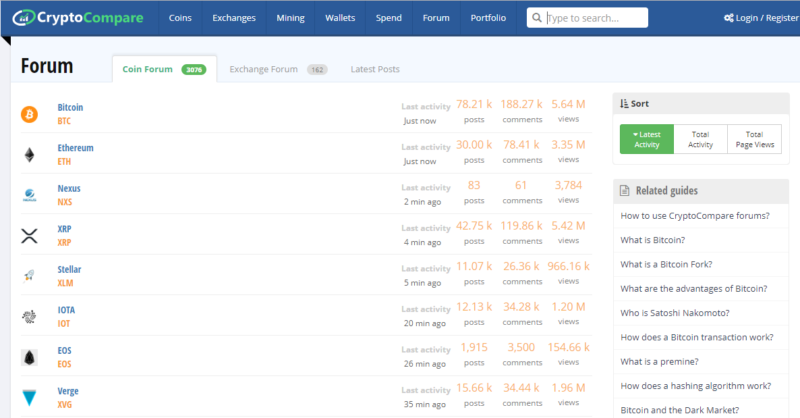 CryptoCompare was founded in November 2014 and released to the public in late July 2015. This platform also provides best information in showing the most accurate live prices, charting and market analysis from the top crypto exchanges globally.

All the knowledge is up to date with the latest price and products available on the market in the CryptoCompare Forum.

This is an interactive site where you can chat with other users by creating posts on various topics and comment on others. You can agree and disagree with what people say to have your say! Also to stay up to date with your favorite movers and shakers you can follow coins and other users to personalize your own news feeds!

As a bonus you will receive a daily report with the selected coin price details and a chart.

Like any other subject of interest, Bitcoin has community channels, groups, lists and pages on all the major social networking sites. Bitcoin enthusiasts are also fond of Slack, a team collaboration platform. Many blockchain companies and organizations have created channels on Slack dedicated to various aspects of the cryptocurrency.

For most social media platforms, such as Facebook and LinkedIn, a quick search will bring you to these forums. Check the following theme groups: Google+ and Facebook.

For others—including Whatsapp, Telegram and Slack—you may need to network and find members from the groups to invite you. 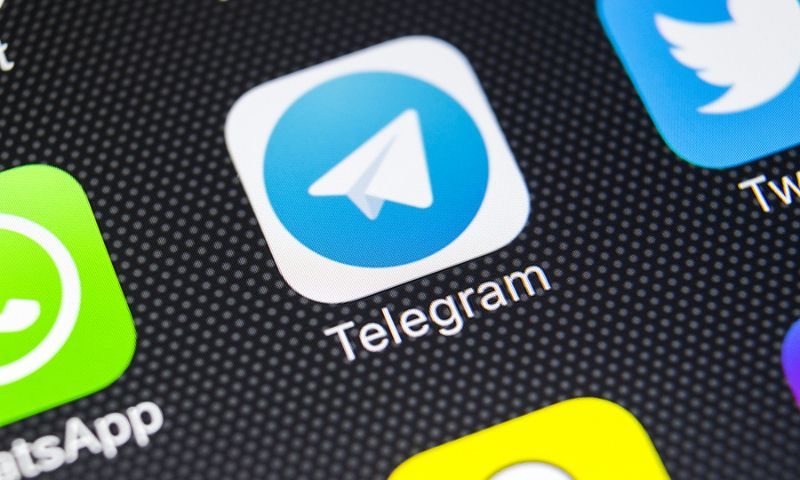 However, we can help you a bit with the popular Telegram groups:

Github is a source-control platform where software developers collaborate on projects. Bitcoin has a repository on the platform with thousands of commits (code contributions) from over four hundred Bitcoin core developers. While not everyone can use the forum, it is the place where developers contribute to discussion about the cryptocurrency through their code. 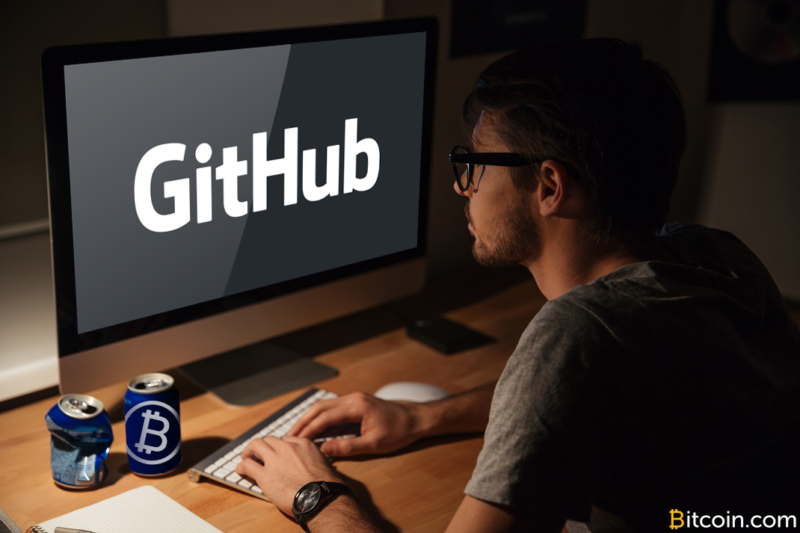 Bitcoin has moved from once being supported by mostly online communities to including many in the real world. Physical meetings that bring together enthusiasts from around the world to discuss its trends happen every week. Three common offline Bitcoin forums are meetups, conferences and hackathons.

It is now more likely than not that every major city or town around the globe has an active Bitcoin meetup group. Meetup.com facilitates the creation of most of these groups.

Members meet once or twice a month to share their experiences and discuss current trends. Some meetup groups have become launching pads for startups, as well as physical bitcoin marketplaces where one can buy and sell bitcoins.

While meetups are local events, conferences attract guests from different locations and may go on for several days. By attending a conference, you may interact with entrepreneurs, lawyers, academics and developers from around the world who have an interest in Bitcoin.

Organizers range from traders, colleges and private companies. You can track conferences scheduled to take place in different cities of the world.

Bitcoin software developers and contributors organize hackathons to collaborate on projects while they network. Participants also use them to showcase their innovations and compete. You can find dozens of such events around the world. For example, there is the annual Bitcoin Hackathon in Miami, which is popular in the USA.

Join the community and stay in touch with other like-minded people, so you can always discuss the latest trends and news with them.