Home / Bitcoin / How Long Does a Bitcoin Transaction Take?

How Long Does a Bitcoin Transaction Take? 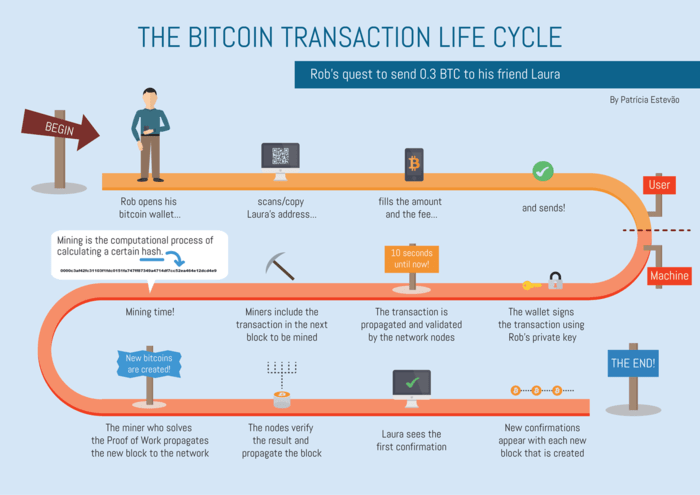 Cryptocurrency continues to be shaped by BTC invention, which entered the digital market in 2009. Satoshi Nakamoto, who came up with whole idea of bitcoin, broke the digital transaction system in a spectacular way. The basic norm in bitcoin transfer is that transactions, at most, require ten minutes for completion. Through an ongoing process called mining, the amount of time might exceed ten minuets but it happens on rare occasions.

Not to worry because it’s not actually bad for your transaction. The number of BTC  transactions on the block and the pace at which miners are responding to the cases all lay an influential hand in the amount of time spent for BTC  transaction to be fulfilled.

2017 was an outstanding year because something weird happened that baffled the entirety of bitcoin family. Many transactions were put on hold for hours because the database was out weighed meaning that ten minutes was foregone.

Now that you are answered on how long does a BTC transaction take, let us look at the basic whereabouts of bitcoin transaction, as well as what determines the duration of a transaction.

What is a Bitcoin transaction?

Always remember that BTC is a digital phenomena meant to bring ease of transacting in the digital format. Every bitcoin operation is encompassed in the crypto family meaning that BTC  can not be held in your hands like hard Euro or USD cash. The value of BTC  is determined by digital forces. Bitcoin transaction is a transfer of bitcoin that has to be backed up by a public ledger which ascribes to the name blockchain.

When sending BTC  from one peer to another, there is use if public and private keys. Public keys can be shared among peers because they are meant to do that, this a makeshift wallet address (aahk180bsgk26399). Private keys are not supposed to be sent to anyone. When it comes to the topic in hand, bitcoin transaction, it contains three important components, these are.

Miners have a tough job in their hands when they receive these details because they have to come up with a series of follow-ups and assessed verification procedures considering the amount of btc transferred in history and what you are transferring in that certain transaction. The process is time hefty and demands that one waits for its completion.

What determines the transfer time of Bitcoin?

We have already mentioned that btc transactions account for ten minutes but that amount of time depends on the efficiency in verifying by miners and how efficient is the bitcoin network. The process is a give and take procedure that entails passing of transaction from a certain stage to another. Transactions are passed to the new block and after they are transferred to the public domain where they are received by miners. Always remember that this whole system takes about ten minuets.

Let us look at the two basic points that influence the time of btc transactions.

There are always those transactions that have not yet been processed, they are bundled together in what is called mempool. Depending of the time spent waiting, the amount of charges and and various fees, the mempool tends to go up and down. Six transaction take up 60 minutes to have a successful transfer confirmation.

BTC mining is an extra digital mile that has to be endured critically by experts who sacrifice a lot of tech knowledge and effort. Every work is paid for and when it come to btc mining, certain fees are charged for certain frequency transactions. Better payments make processing easy. Always remember that Satoshis per byte is the weighing tag. These fees are mainly focus in facilitating verification. The high volatility rate of btc makes fee fluctuation.

How long does it take to receive a Bitcoin transaction?

At most, one minute to 60 minutes. If your case is rare, transactions can go for a day before they are passed. Everything is shaped by certain factors and when it comes to such a case, there are two basic considerations that influence, these are.

Blockchain is at the center of things when we are talking about transactions and the amount of transactions that are available on a block determine the period of processing. Through 1Mb block allocation and miner frequency, transactions can be stalled for long period.

The already mentioned 1Mb block size is what makes fee charging exceptional. Bigger is always better and miners always make first preference to transaction that have a huge fee tag attaches to them. In simple terms, what we trying to say is that if your transaction has a minimum fee charge attaches to it, chance of a fast response are low as compared to that transaction with a huge fee charge.

When is a transaction confirmed?

How to send Bitcoin faster

By putting a lot of fees on your transaction you are simply increasing your chances of getting a miner who will, in return, engage your transaction and work towards it. Wallets differ. There are some concerns that allow you to transfer fee charges there by making your life easy. This enables fast transacting. Let us look at another method in detail.

What is light networking? Well, this is another version of payment that focuses on elite btc. It is a bit selective meaning that the frequency of overloading is low. Guided by a number of principles and guidelines, light networking appears to be more ideal. Payments are made in a whisker and charges are zero to none.

Q: How long does it take to transfer bitcoins between wallets

At most, 60 minutes (1hr). In rare occasion some have gone foe 6 to 7 days. Reason being that many factors coincide in btc transfer, these same factors have big influence and they also have a hand in the confirmation process.

Q: How long does it take for a bitcoin transaction to be confirmed

From block stages to mining operation, a btc transaction goes through a lot of computations and verifications. The presence of reversed unconfirmed transactions or the possibility that the transaction can be posted twice is real. The moment that a fresh block is added to blockchain, that’s when a transaction is confirmed.

Some huge sums of btc demand six confirmations meaning that you can take a long time before you are completely cleared. You would probably need 60 minutes to be cleared. As we have mentioned earlier the concept of attaching low fees to your transaction discourages miners and you can find out that time spent will be long. Your btc transfer can spend long hours, even long days before it receives a miner because of a low fee. This is one if the biggest factors that determine the period of confirmation.

As we have mentioned, sending of bitcoin might take little time but the process of confirmation becomes the problem. Verification processes and computations are many meaning that in a pool of many transactions, your can either be allocated with fast response or low response depending on showing you have tagged as fees. Major priority should lay on fees.

The higher the fees, the better the chances of getting a miner in quick succession. Also influential is the type of payment that a client chooses. Make sure that you use light networking which is cheap and efficient, with so much guarantee or you could select other related options. Those are the basics of btc transactions.