Genesis mining was founded in 2013 an is one of the oldest Bitcoin companies around. It’s one of the most, if not THE most, well-known companies when it comes to cloud mining.

Genesis has a mining farm in Iceland. Users rent “hashing power” in the form of a two-year contract from Genesis for a one-time, upfront fee. In return, they receive daily payouts in the specific cryptocurrency they purchased in their contract. Now, of course, you want to know if cloud mining with Genesis profitable. Let’s find out!


When you are signing the contract, you can see the upfront cost, however, you are unable to get an idea of how many coins you will get by the end of your contract. It mainly happens due to cryptocurrency volatility and future uncertainty:

How Does Genesis Mining Work?

According to their website, is an easy and safe way to purchase hash power without having to deal with the complex hardware and software set up.

All you need to do is set up an account with them to start mining. After signing up, fund your account via Bitcoin, PayPal, credit card, or wire transfer, and then choose the mining plan that’s best for you.

You can start mining cryptocurrencies on this cloud mining service with only 28 dollars in your pocket. That’s how much is the cheapest contract under which you become the owner of 2 MH/s.

The Most Profitable Currencies to Mine

There are about a dozen altcoins (Ether, Litecoin and others) on the resource Genesis Mining, except for bitcoin, and you can choose any of these currencies for cloud mining. But, of course, the question immediately arises what kind of currency to produce the most profitable returns? To determine the profitability of mining of a cryptocurrency, you can use some profitability calculator.

In other words, there is no universal answer. In each case, you need to calculate everything, taking into account the factors that affect this very profitability:

The data is calculated for the last 100 days, if referrals spend a smaller amount, the rank will decrease. The administration does not limit partners in legal ways to attract new customers. You can post your promo code or link to websites, blogs, social networking communities, comments on forums, your channel on video hosting, email mailing lists. It is recommended to pay attention to social networks like Facebook and Twitter, where you can find a lot of target users.

Here are different scenarios to get a better idea of what could be and if it is worth it. 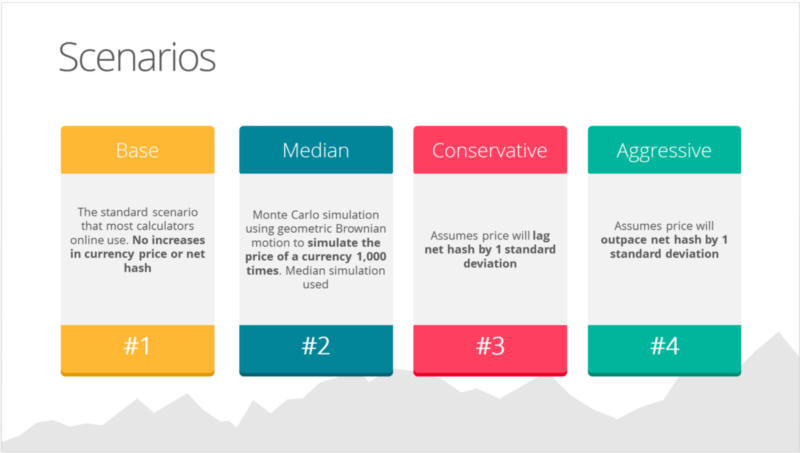 Here we can see one of the 1,000 price simulations run to inform our forecast for the Median, Conservative, and Aggressive scenarios.

Why is the price so high? This is what happens when you have a volatile currency in a simulation that does not have changes in volatility. When a currency can move 20% in one day, it is not uncommon to see price movements like this. Ethereum could easily grow 25x in one year.

Who is Genesis Mining for?

The initial upfront costs and potential profitability are hidden when investing in hashing power contracts like Genesis Mining.

However, with some robust analysis, we can get a better idea of how to assess the potential profitability of a two-year deal.